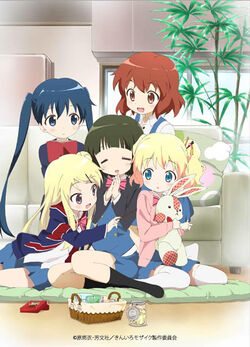 Kin-iro Mosaic is an ongoing Japanese manga written and illustrated by Yui Hara that started publication in June 2010. An anime adaptation by Studio Gokumi was announced, and started airing on July 6, 2013.

Shinobu Ōmiya is a young girl who once stayed in England, where she met Alice Cartelet, enjoying the time spent with her. One day, Shinobu receives a letter from Alice saying she is coming to Japan, and surely enough she appears and joins her at her school.

Community content is available under CC-BY-SA unless otherwise noted.
Advertisement