Karen trying to memorize the other girls' names.Yoko, Shinobu, and...

Karen is a cute fair-skinned girl with waist-length pale-blonde hair that is worn loose with a small amount pulled into a bun on the left side of her head and light purple Tsurime eyes.

She wears the school skirt and top with a dark blue Union Jack design on it, the pink striped bow-tie, and a pair of dark blue socks. She wears her own red sneakers with the Union Jack design. During summer, Karen switches for a sleeve-less parka reminiscent of her jacket.

Her casual attire is fairly normal with a mixture of playful and feminine.

Karen is a carefree, happy-go-lucky person who tends to get excited or passionate about new things fairly easily. She is never afraid to try something new or risky, but sometimes her imagination gets the best of her. She is very charismatic and is friends with just about everyone in the class to the point that they have begun to feed her during class break once she befriends them.

While she can come off a little immature or selfish, she is very affectionate with friends or even some strangers, and she values her friendships with everyone. She is extremely loyal, but enjoys teasing people she is close to. She also tends to be one of the few girls to make a perverted comment or joke.

She usually speaks slightly broken Japanese (presumed to be on purpose) when communicating with her friends, but she can speak fluently sometimes; much to her friends surprise.

Like Alice Cartelet, Karen is very fond of Japanese culture and she usually ends her sentences with "ですよ" (desu yo) wherever applicable.

Karen also comes from a massively rich family, which is her parents and herself. This often surprises her friends apart from Alice, of whom, it is assumed has always known about Karen's wealth. Karen's family wealth is expressed mostly when Karen turns up in a motor-home of grandeur size and explicit quality (the trailer being of house-like design in the interior) to meet her friends, and when Shinobu Ōmiya and Alice go to meet Karen at her place, which turns out to be an entire block of flats. Also, in certain flashbacks, Karen's house in England appears large (like Alice's) and richly decorated on the inside, which also suggests her family's state of wealth.

In the manga, it has been revealed that Karen simply told her father that Alice Cartelet went to Japan and that she wanted to study more about the Japanese culture and her father happily allowed her to live in Japan as well.

Karen enjoys playing with Shino and hanging out with her. She loves to get attention from Shino, and sometimes enjoys using it to tease Alice; when she isn't actually aware that she is doing it. As she is able to bond with Yoko with poor grades, she is able to also bond with Shino.

As she has known Alice the longest, Karen is very close to her. Since they were little she has admired Alice, who back at the time was actually bigger than Karen. For a while she felt neglected as Alice gained her foreign interest, and one day, after being ignored went out and didn't return home. As it turned out she had fallen from a bridge and landed on the grass land beneath it, but was stuck due to hurting her legs. She called for help and as it got late, Alice finally found her. Since then she has continued to look up to Alice and considers her to be her hero. She loves Alice like her own sister.

Karen is not shown interacting with Isami as much as Shino, Alice or Youko Inokuma has. However, since she met her, she has admired her models talent and beauty.

Karen has fun teasing Aya, who she personally addresses as "Ayaya" after Aya nervously tried to introduce herself to Karen. Aya does not like the name, but after a while she stopped protesting it so much. Karen is one of the only characters that is aware of Aya's crush on Yoko, along with Kōta Inokuma and Mitsuki Inokuma (Yoko's younger siblings).

Karen and Yoko get along due to their energetic, hot-blooded personalities. They both do poorly over school and bond over this, as well as the fact they both have large stomachs and enjoy eating.

Karen warmed up to Honoka quickly as the first girl in class to notice or speak to her. During season 2 their bond was shown strengthening as Honoka gained her own blonde fetish. Sometimes when not with the other girls she hangs out with her.

At first, Karen had a lot of trouble with her new teacher, due to being a thoughtless student. In due time she grew a bond with her by trying to befriend her. But this doesn't mean Akari allows her to act up or let her slack off. 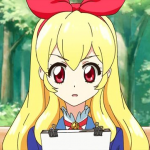